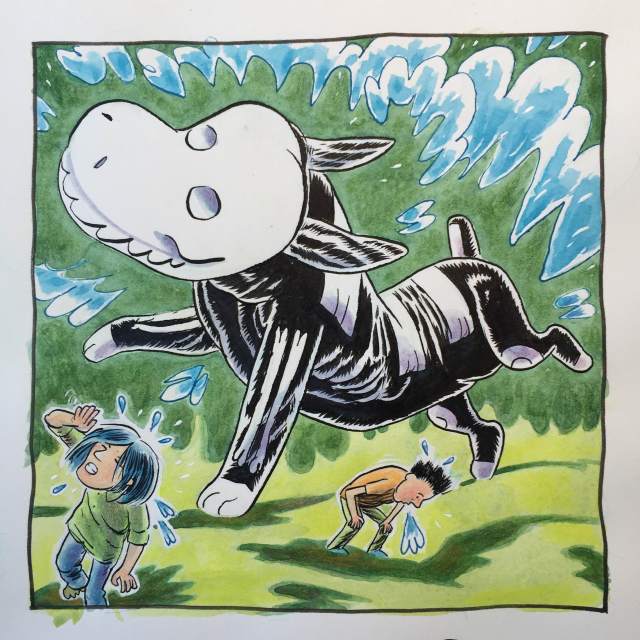 SMOKE excerpts:
“The naive honesty of Benton’s cartooning style — no-doubt carefully cultivated — and the intricacy with which he envisions a garden of thick vegetation or a byzantine hell-palace of crisscrossing warehouse beams, is phenomenal, as is his fantasy palette of fiery and elysian other realms, and his grasp of cultural detail and extension of Day of the Dead and other memorial motifs.

The imaginary-friend/pet-dragon feeling of a certain major canine character we see on the cover (and who readers will recognize from Benton’s previous masterful myth about states of being, B+F) is vivid, but this is a bedtime story some don’t come back from, and one meant to give us strength even as it sadly soothes. Among the best things I’ve read this decade (without a single word), SMOKE shows titanic, intimate care for people’s honestly observed and deeply felt difficulties, their rare and treasured rewards, and the cyclical nature of mortality — giving a vision not only of a pasture waiting for everyone, but a proper place existing for each of us, on one side of eternity or the other, in a universe too vast to be cruel.” 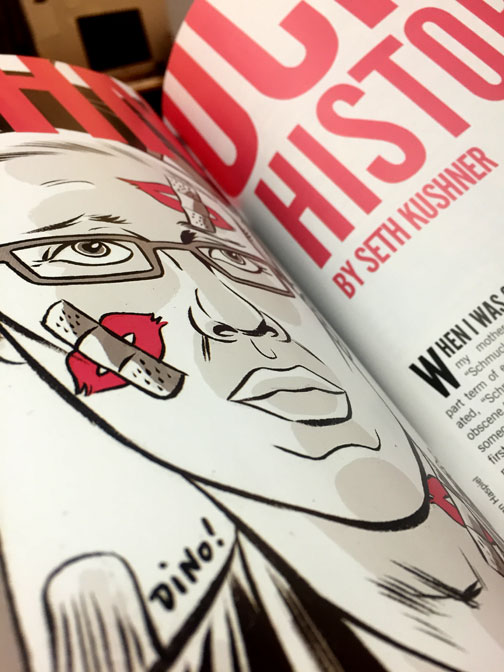 SCHMUCK excerpts:
“Kushner knows how many sides there are to this story, so each one is expressed in a different visual voice. I especially like the tense, frenzied line of artist Kevin Colden; the out-of-register looseness and emotional immediacy of Nathan Schreiber; the garish, ungainly yet dynamic honesty of Skuds McKinley; the intimacy and authenticity of George Schall’s watercolor-sketchbook verite; and a tale with art by Christa Cassano in which the most physical of encounters is drawn with figures like phantoms and dreams.

The sexual slapstick is a hoot and sometimes horrid and always insightfully recalled, though the heart of the book for me was all those stilled and isolated moments when Adam’s loneliness surfaces and both his longing and his realization of what he’s really looking for come into view with nothing for him to currently block them out with. (Personal bias perhaps; I lost my wife to cancer not long after we lost Seth, and I relate to his avatar’s loneliness and uncertainty if not his pursuit.)

This all leads somewhere, and I can tell you without giving away too much that Seth didn’t always have unhappy endings. It’s no spoiler to you reading this, or anyone in the comics community, that long before he sprouted angel wings, the caterpillar turned into a mensch.”

HANG DAI Editions was founded in NYC by Gregory Benton, Dean Haspiel, and Seth Kushner over their mutual dedication to comix art. The imprint focuses on limited edition comix, graphic novels, and art books, with an emphasis on personal interaction at events, conventions, and signings.
View all posts by hdeditions →
This entry was posted in Uncategorized and tagged Adam McGovern, ComicCritique.com, Gregory Benton, Schmuck, Seth Kushner, Smoke. Bookmark the permalink.